I can hardly believe that it's been since JANUARY that I have not spoken to y'all here! WHAT A WHIRLWIND THIS YEAR HAS BEEN! Storms and sunshine, stress and blessings galore. I love how Nahum reported it (first chapter, verse three). The Lord is slow to anger, and great in power, and will not at all acquit the wicked: the Lord hath his way in the whirlwind and in the storm, and the clouds are the dust of his feet.

Last June, almost a full year ago, knowing that the debut of my gist ever historical Christian romance VOW UNBROKEN from Simon and Schuster's Howard Books--what and honor and blessing that is--would be in March 2014, agreed to be the director for my writers' group's twenty-eighth annual Writers' Round-up Conference hosted by the Northeast Texas Writers' Organization scheduled the last weekend in April. I stated clearly I'd have to get it planned and organized well before the start of the new year (six months away at the time) because of planning and executing a fantastic book launch month! But things didn't go as planned. That ever happen to you?

Without dwelling on things that are not worthy of a good report, suffice it to say that my life became a whirlwind of conference planning against constant attacks and book launch planning with God's favor going always before me. By January, I spun in the middle of the whirling wind until March when the highly successful March through Texas Tour began. All the 'work' was over and the time to enjoy the fruit of my efforts had arrived. Twenty-six events in twenty-two cities in thirty days! Whoopie!

It started in my new home town of Clarksville in Red River County where Susannah (VOW's heroine) lived and scratched a living for herself and two children on the Tejas prairie from 1822-1832. The Italian Bistro welcomed me on that wonderful Tuesday March 4th, 2014, Debut Day!

Friends from my Ladies group, Prayer Group, and Book Club showed up with their friends and family to help celebrate VOW's release and support me. I couldn't be more grateful!

The next day I was off to DeKalb where I'd lived five years prior to moving to Clarksville - in Red River County but being on the county line, we had a DeKalb address. At the Launch Party, held at the Williams Historical House Museum, the hostesses pulled out all the stops and it was a huge success.


About fifty great folks attended the
Launch Party and we all had a great time thanks to cracker jack hostesses! Words aren't enough to say thank you! 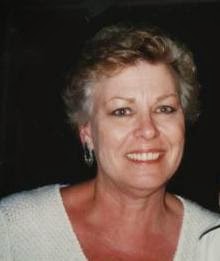 SO, I must admit, after that the order of the events become
foggy, We had in-store book signings, home parties, parties
in restaurants, and at a great church in West Tawakani ~
that one hosted by a dear friend Margaret Endicott who I
went to church with in the 70's and it'd been about that long
since we'd seen each other. Of course we forgot pictures
there! :( Too much fun I suppose! But here she is in one I
copied from her facebook.
It was a beautiful month I'll never forget! Here
are photos from all those great events! I hope you enjoy!
Would have been grand if you all could have come to one,
but still, I pray we get to see each other soon! 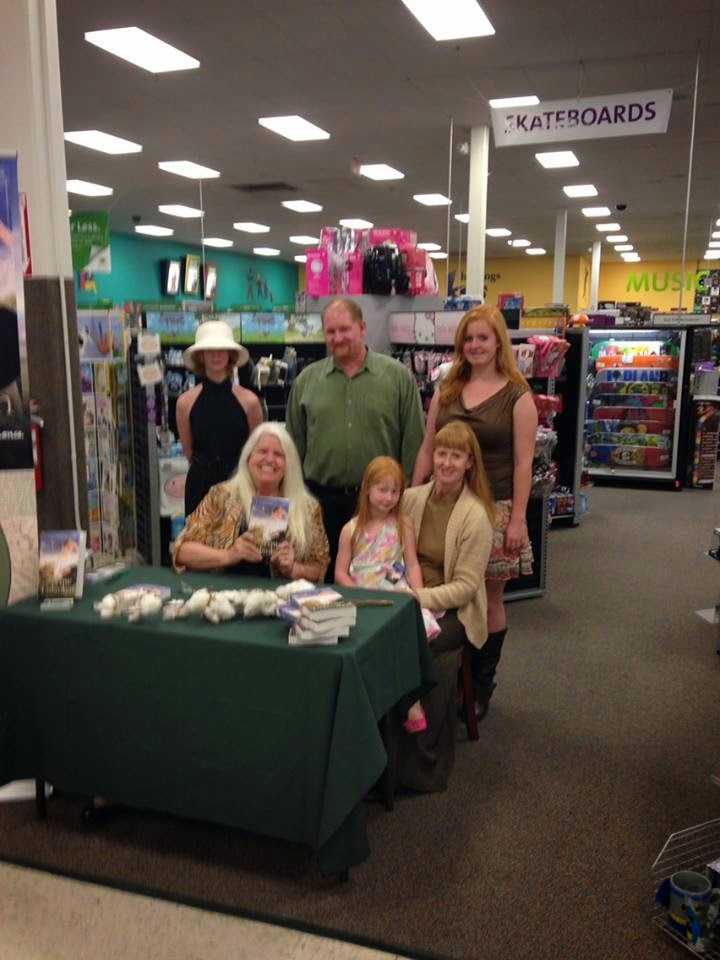 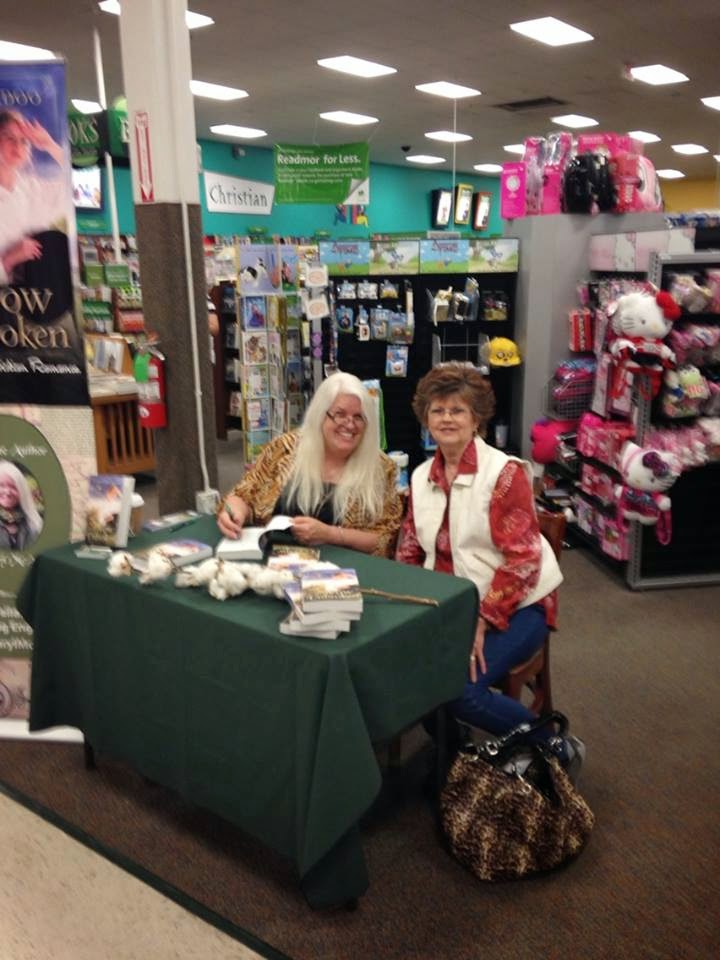 At Hastings Bookstore in Mt. Pleasant with Pattie Ball (left a.k.a. Ann Everett, her pseudonym) and the Simmons family on the right. Lisa Simmons (a.k.a. Lisa Brannon by pseudonym) and Pattie both go to the Northeast Texas Writers' Organization where my husband Ron and I have been members three years.

To the left, at Barnes & Noble, Southlake with my sister and husband Cathy & Kevin Barnett. Sold that big stack of books down to the nub!

Got to hold my new great nephew Rowan at Barnes & Noble as well as see two of my favorite nieces Jessica and Joanna. Also got to meet with a Facebook friend I've been visiting with for at least five years, but never met face-to-face, Margo (below right/right)o  Carmichael in the blue shirt and in the stripes, a dear friend God gave me through our River Bottom Ranch Stables in Grand Prairie, Sandra Archer. Sweet times celebrating VOW UNBROKEN with new and old friends and family, too! 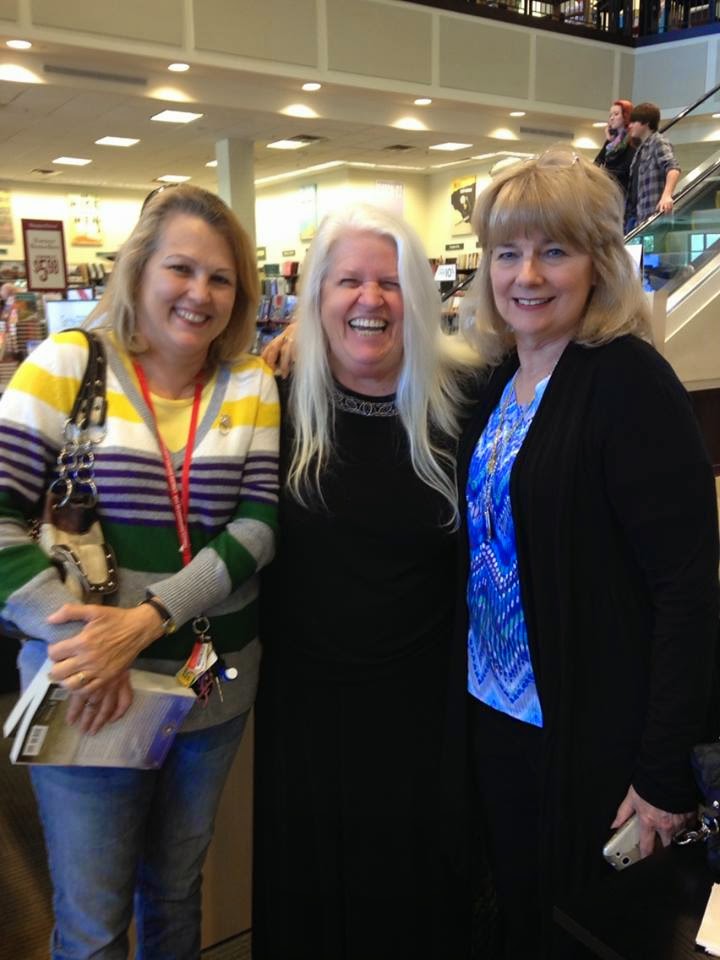 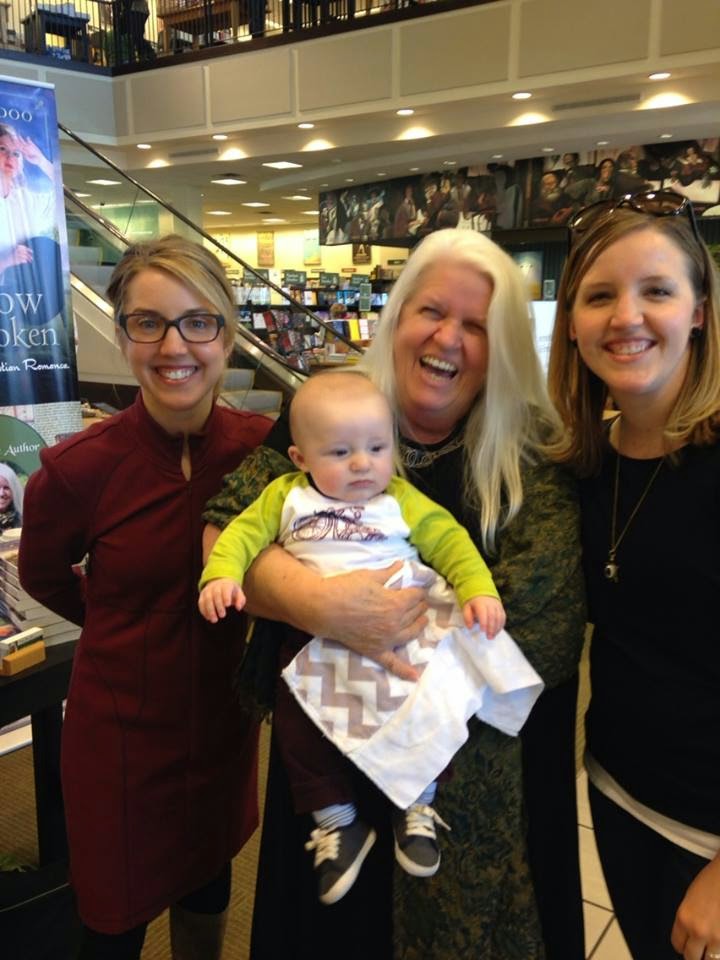 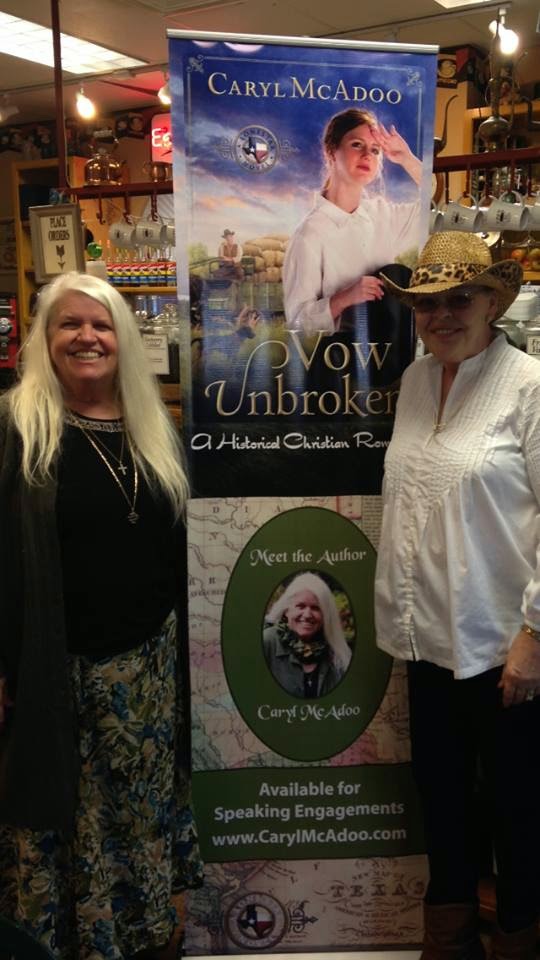 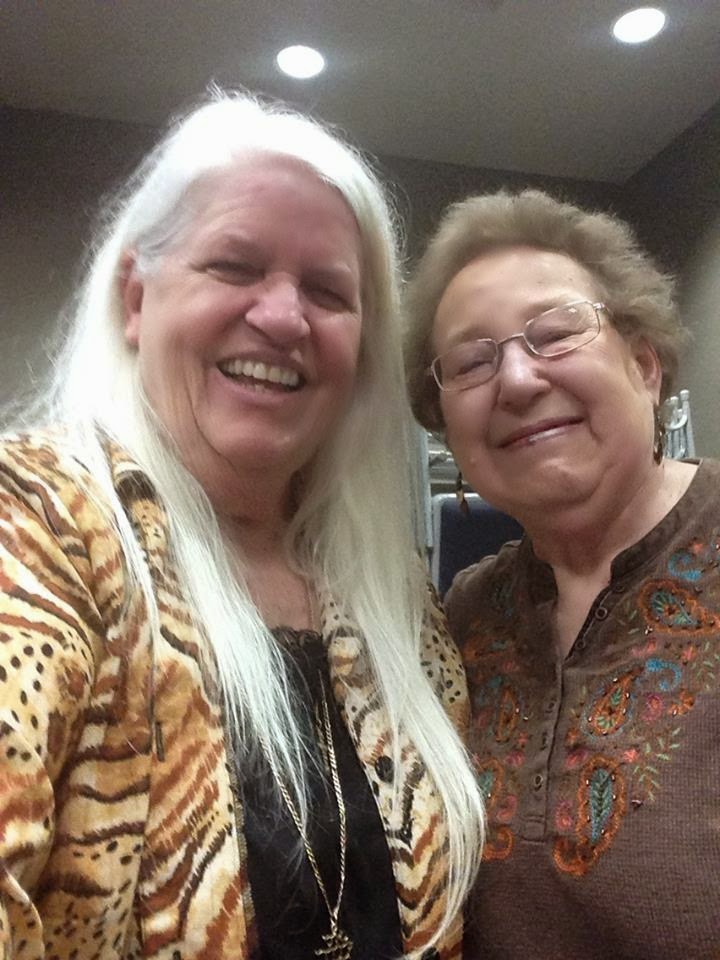 In Grand Prairie, I had a party at The Brass Bean where my best sister-friend of almost 40 years Elaine was hostess, and my friend and mentor Don Whittington blessed me by coming!Of course I missed getting a photo!
Then the next morning, I met some new and old friends at the Grand Prairie Library! On the right here is Helen, the best midwife in Texas! And below left is with long time friend Joyce. 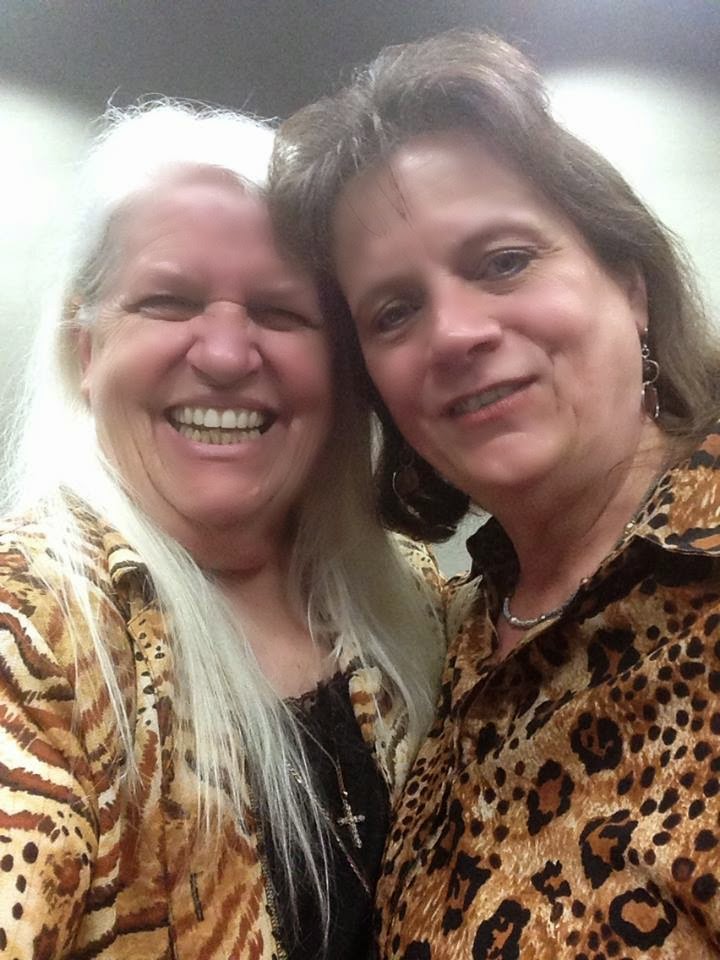 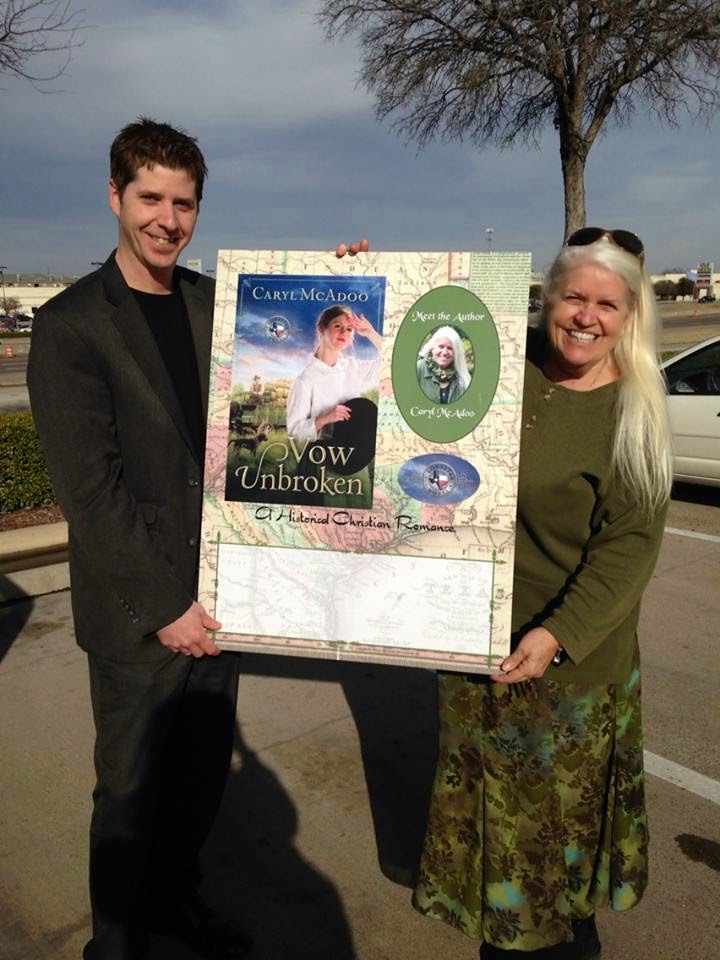 My youngest son Russell (left) not only hosted a great Launch Party in Lewisville at LaMadeline's, but created me posters (like this and smaller), bookmarks, and the big surprise was the pull up 8' tall banner you see in many of these photos! Debbe France, the Barnes & Noble manager at my very 1st booksigning in 1999 attended, no picture! 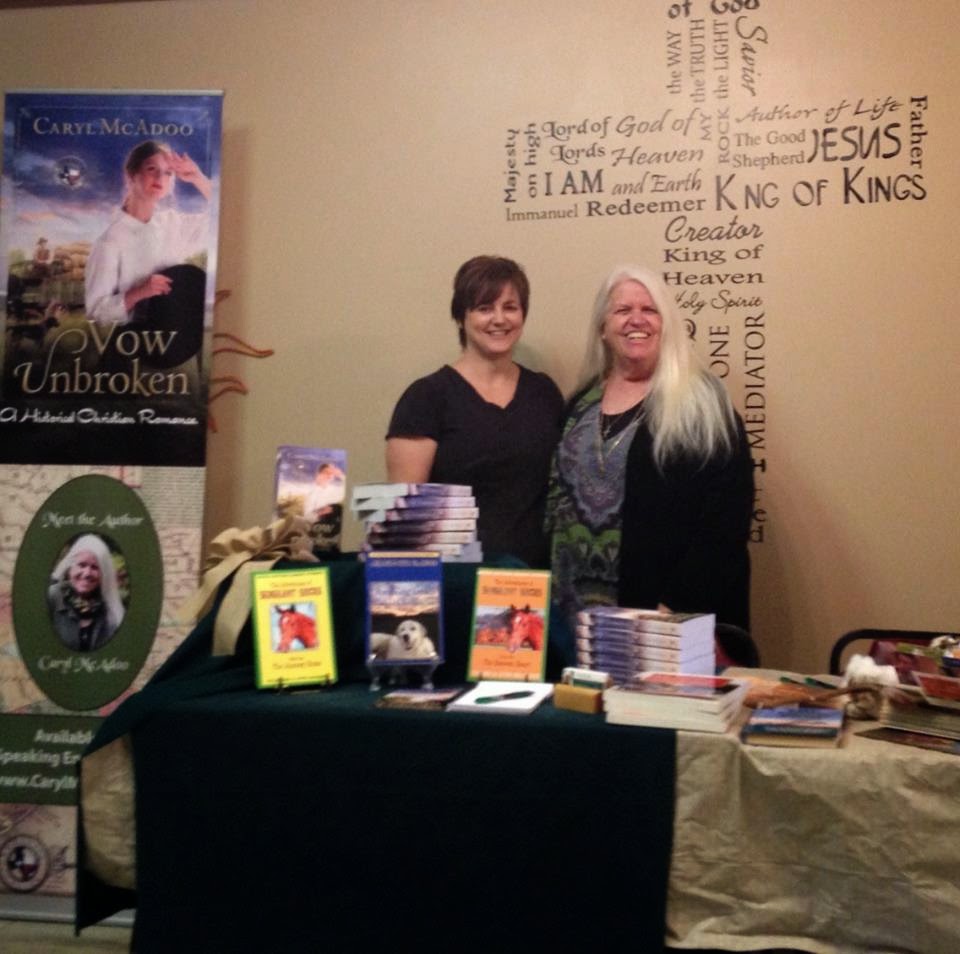 Back in DeKalb, good 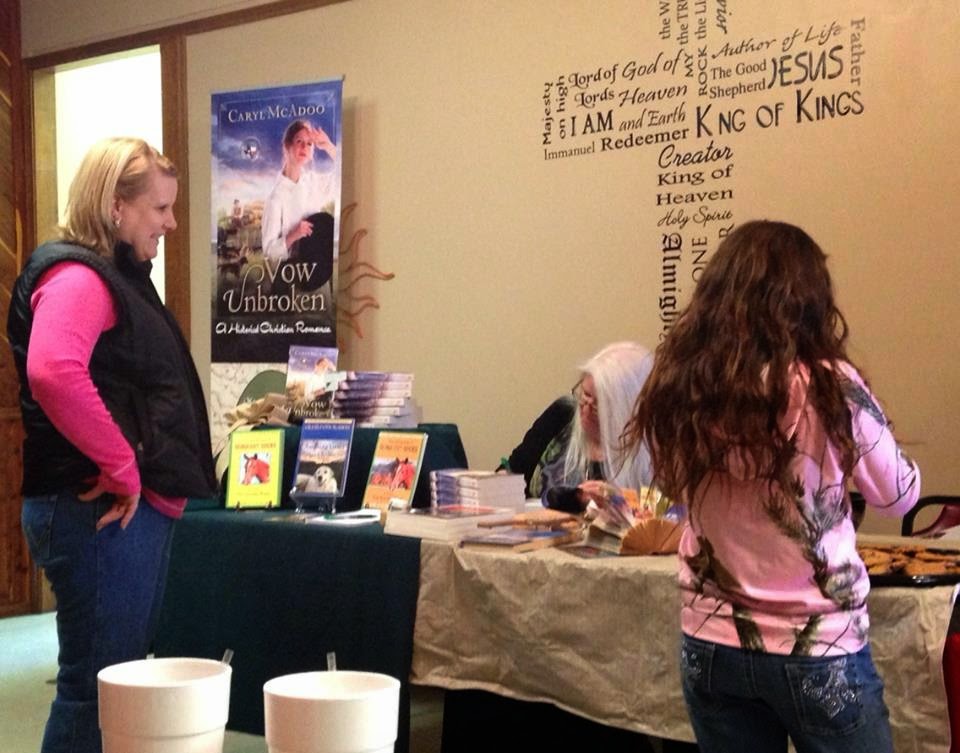 friend Robin hosted a
party for me at her Pizza
Pro! She's on the left here, and on the right is her daughter Melody and friend Kassie. What a good time! My grandsons attended this one, no way were they going to miss out on that scrumdillyumptious Pizza Pro pizza! 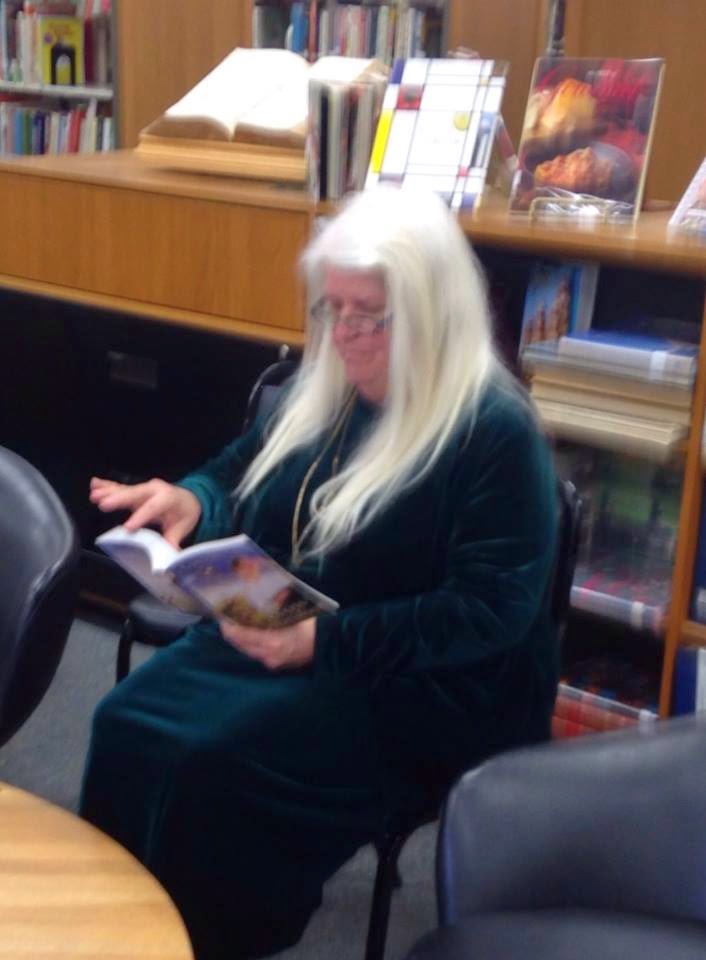 I'd be crazy if I told you the hectic schedule didn't wear me out.
I laughingly say that I'd forgotten how old I was, but it's true. At the end of the month I was exhausted, but during it, day by day, as I saw old friends like Phil and Connie Briscoe who we went to church with back in 1975, I was so blessed. They came to the book signing at Mardel's in Hurst (no pictures!) where I also met many of my daddy's church friends. He was there to host that Launch Party! Daddy's 85 and an avid voracious reader. When he finished VOW UNBROKEN he called me sounding quite surprised that he really enjoyed it! I love my daddy. Below, here he is on a recent visit! Right is me reading at the Clarksville Public Library, the 2nd party on Debut Day. 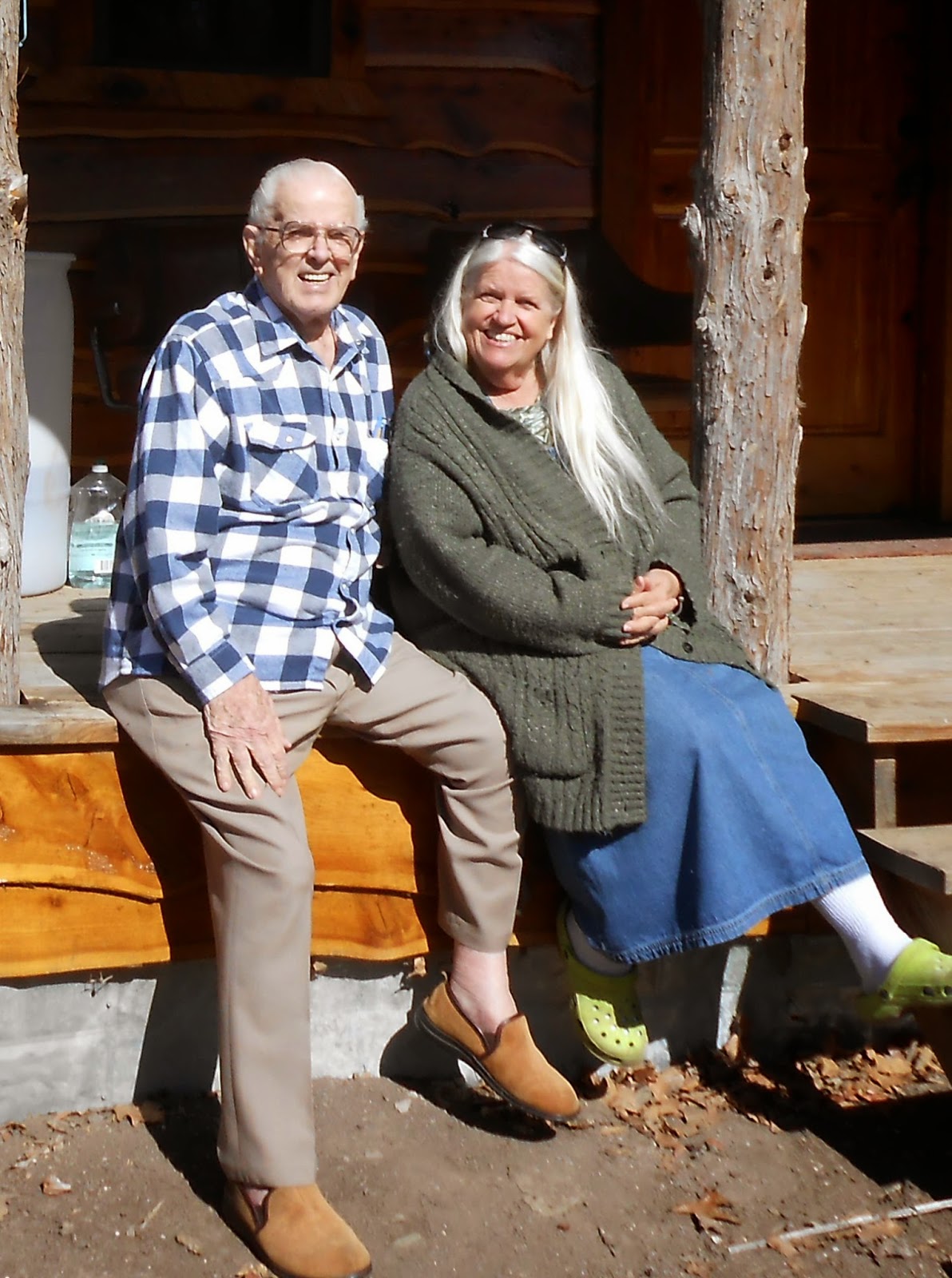 At Roots in North
Richland Hills, with '80s church friends (below) Mark and Paula Leeper, like thirty years since we've seen each other. Sweet reunion at this party hosted by my sister Cathy who did a fantabulous job I so appreciate! Can't tell you why we didn't get our picture together! Me too busy signing, her too busy visitin'? Having too much fun! 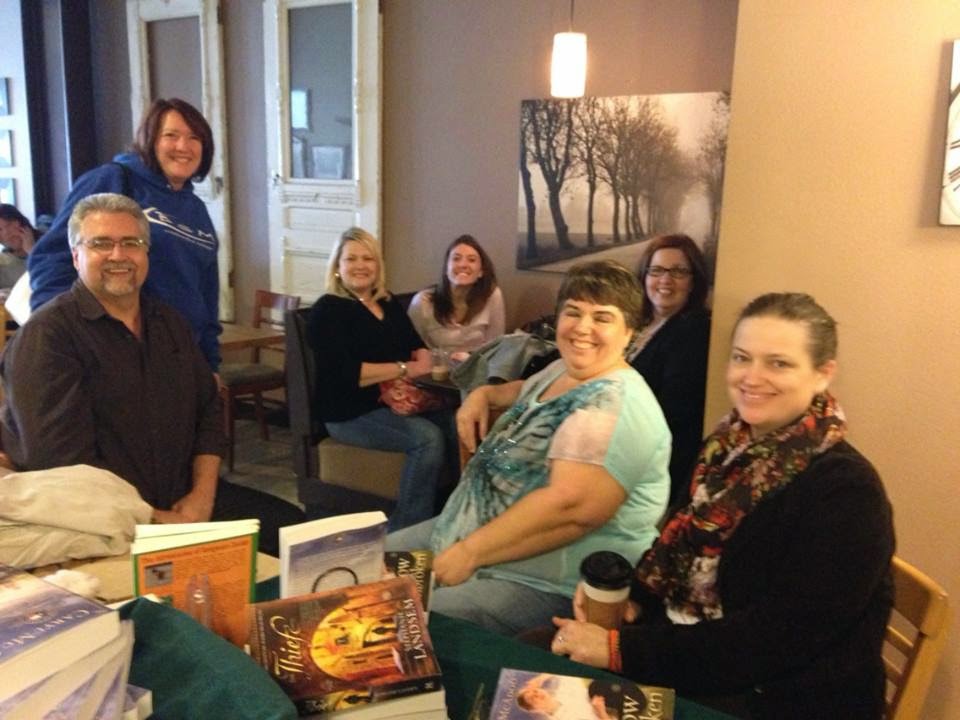 Here's all the group at the Roots including a daughter I hadn't got to see in a while, my sweet Janis - lower right corner of photo to left.
And you never know who God has listening. I was sharing with a friend buying a book how I always say that I'm blessed and highly favored when people ask, "How are you?" How once back when I answered the proverbial "Fine." and was immediately convicted that was a lie. So, twenty years ago, I started the habit of saying, "I'm blessed and highly favored" which is ALWAYS true because I belong to God! A lady sitting at a nearby table told me how blessed she was by that testimony. And of course, even more so than just being His, I have spoken those words into the universe thousands of times by now. And the scripture that says He will create the fruit of our lips... Has brought it to be His best blessings and constant favor are with me always. 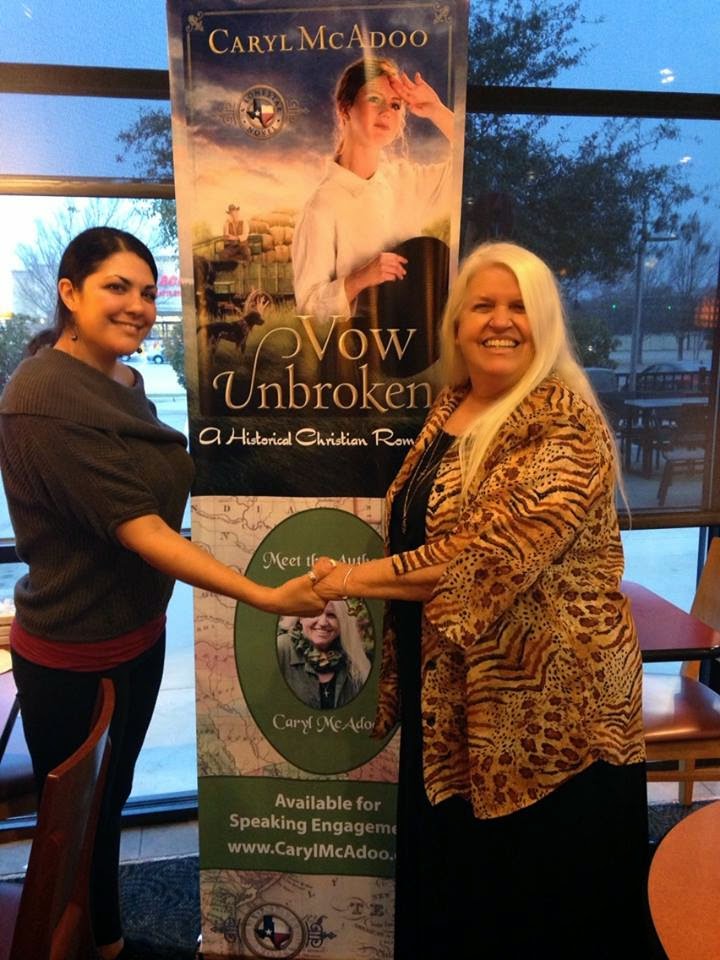 At Panera Bread in Cedar Hill with a new friend Brandy, a CFNI (Christ For The Nations) student who sat at the table right next to us a stranger and became a friend! Another precious lady overheard us talking about the 'harvest' and joined our conversation. They both got a book, and before it was over, we stood in the middle of Panera Bread holding hands in a circle and praying! The presence of God was awesome! 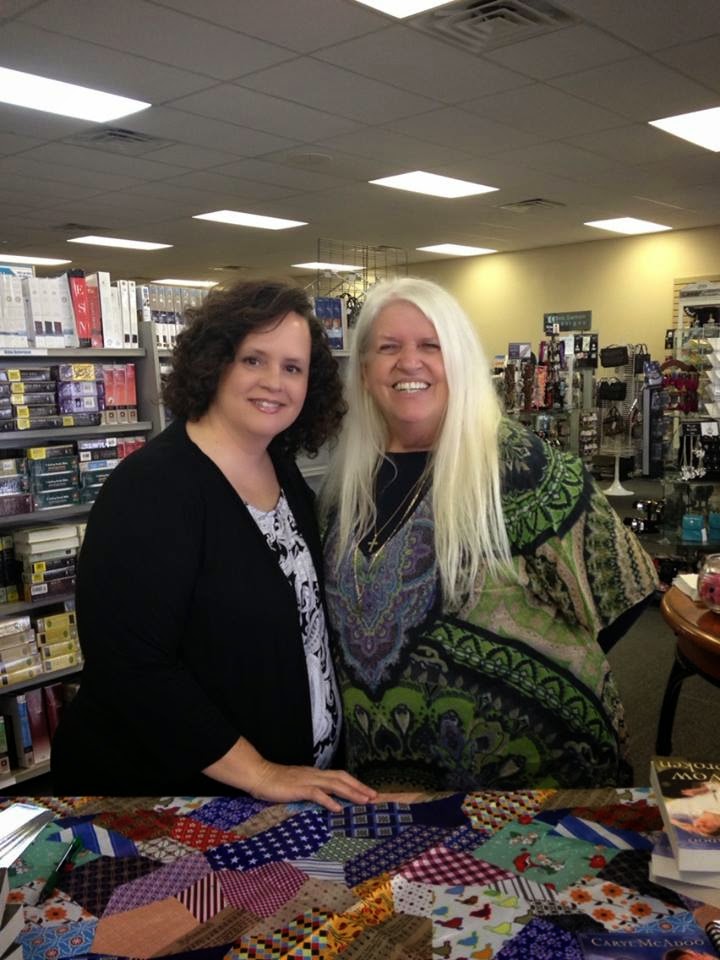 On the left, I'm with Angela, hostess for my parties in Tyler. This one is at the Scroll Christian Bookstore where I met some lovely people and was prophesied over by a precious lady who prayed for me! The evening before I was at Fireside Books and I'll have to add a photo taken there! 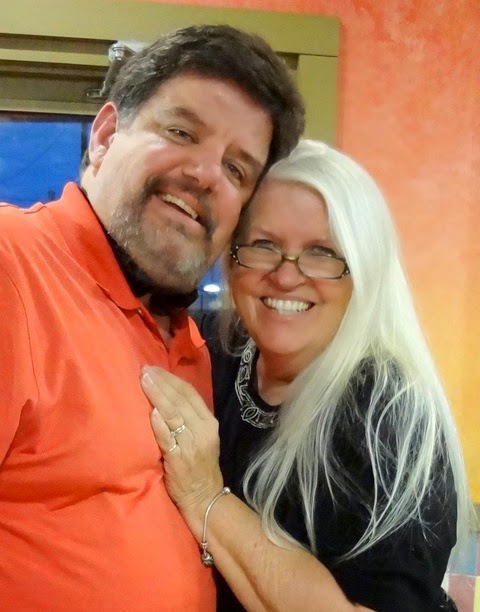 All in all I so enjoyed my trip to Tyler! It was the first place I drove my BEAUTIFUL brand new Corolla to that God provided miraculously! He loves me SO! See? What did I tell you, blessed and highly favored! 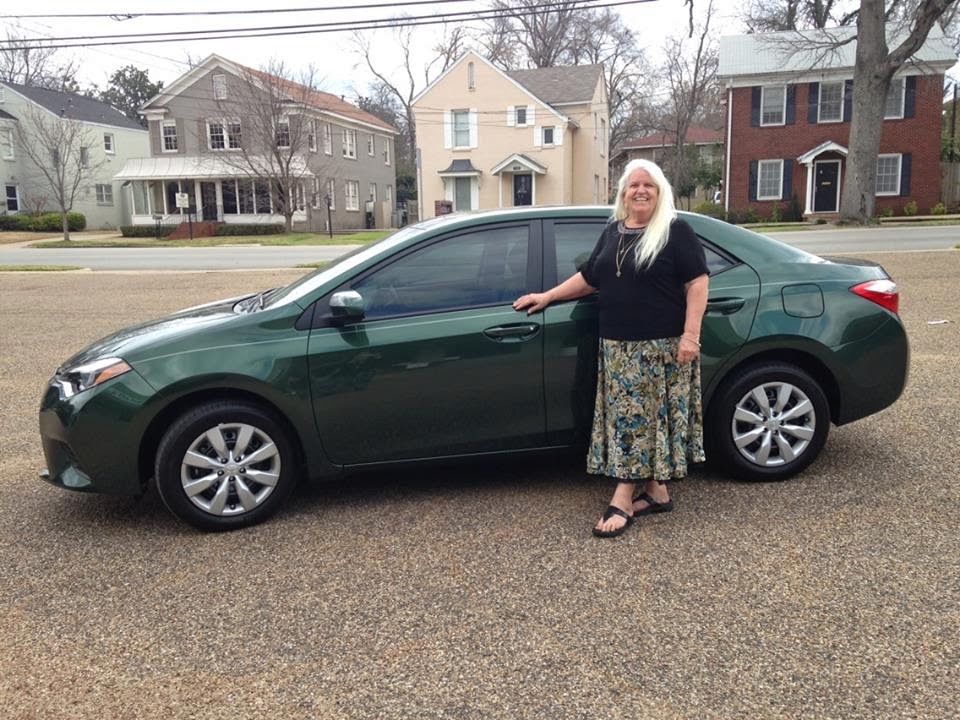 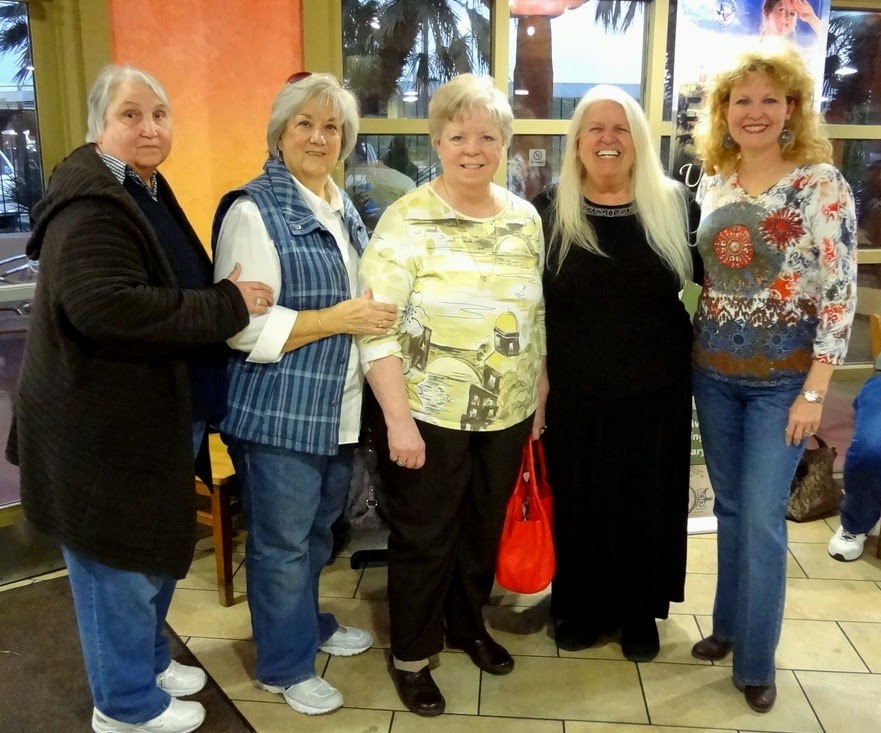 So the rest are all from my Irving Launch Party at Taco Cabana! Left of my car there is my baby brother Norm, and directly left are FIVE cousins. We three middle ones grew up together of course, and I'd say we're more like sisters. Left to right: Ruth Ann (from Oklahoma), Jimmie Lynn, Mary Jo, me and Gayla Gwen (Norm's wife, my sister-in-love).
Directly below is the hostess of this party, my dear sister-friend Glenda. She is a sweet sister in the Lord and made the party so special! Lower left, my sweetheart-n-me! And lowest left, high school girlfriend Peggy Panell Chrusciaki and husband! 4 more years til our 50 year reunion!!! Been that long since we've seen each other, but we're FB friends! 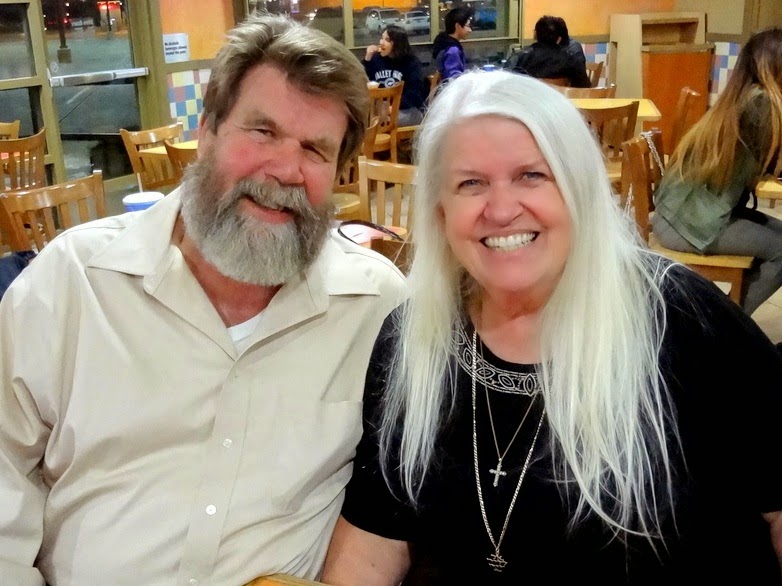 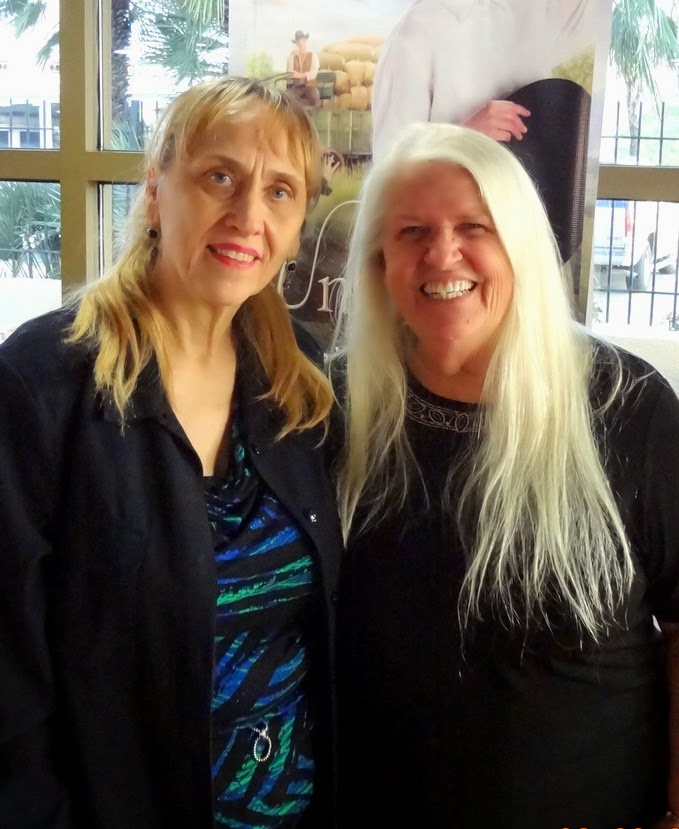 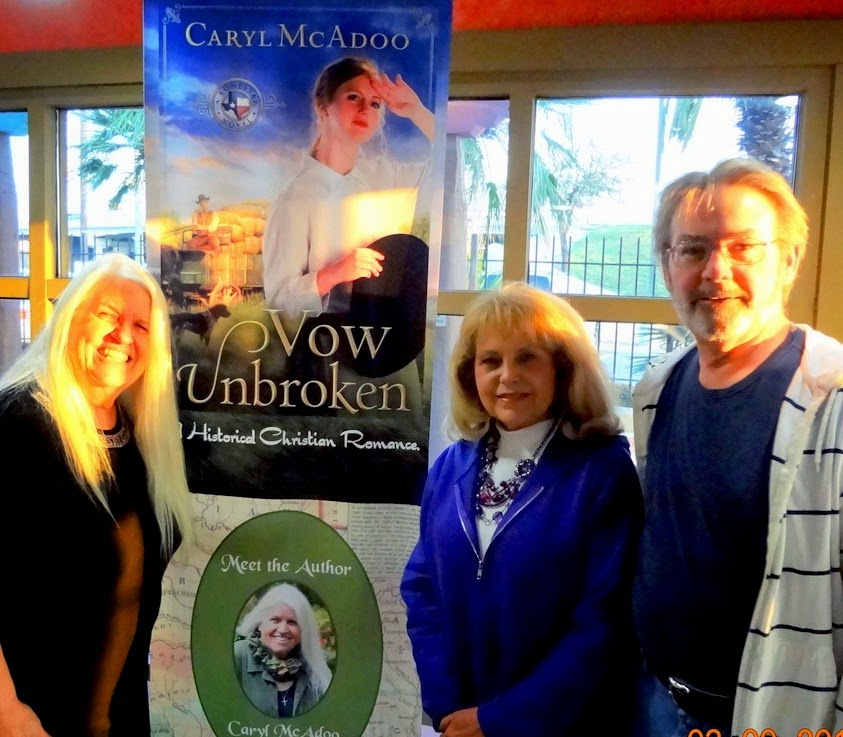 From the beginning - if you remember that far back :) - you remember that the day after the last Launch Party, I had to jump in over my head into Conference and all the last minute details. It was not easy, but I pulled it off and even got many compliments! So praise the Lord for helping me. Praise Him for opening doors and keeping His favor all around me. Definitely could not have accomplished these things without Him! To God be the glory!

I hope you've enjoyed seeing all the fun and pray that God will bless you with all His best!

Posted by Caryl McAdoo at 8:55 PM No comments: