Rebecca looked out her window at the star filled night sky. She loved all the tiny twinkling little points of light. There must be millions. The moon shone bright on the cotton field and looked so beautiful. But something weighed heavy, troubled, her little heart. It had been for a while, and she’d been thinking hard on it. She tiptoed back to her bed, knelt on the braided rag rug, and pressing her hands together beneath her chin, bowed her head.

“Dear God, I know you’re my daddy since I don’t have one, Mama said. But that’s what I want to talk to you about. All my friends have a daddy who lives with them, and I want one of those, too. I want a daddy to carry me on his shoulders, and you can’t do that. And I really want a daddy to take me fishing. Oh, and to help Mama, too, because she has to do everything all by herself, and she needs lots of help. She really does then maybe she won’t get so mad and be so tired all the time. 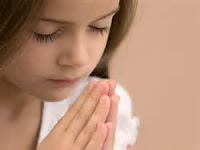 "Oh, yes, thank You for her, she’s the best mother and I love her very much. Thank You for our house and Ol’ Betsy and her new baby. He’s very cute, and I wish we didn’t have to eat him when he gets big. And thank you for the rain, too. That made Mama very glad and happy. Thank you for my friends Sophia Belle and Sassy and let me play with them again real soon. And I guess thank you for Levi, too, even if I don’t like him always trying to be the boss of me.” She opened one eye and peeked up at the ceiling. “And You know he ain’t.”
“And that’s another reason I need a daddy so bad; on account of Levi always telling me what to do. Now I’d mind a daddy, God. So that’s what I want more than anything else in the whole world. If you will please send me a one, I promise I’ll be very good. I’ll always do my chores and eat all my peas and never hit Levi anymore. In Jesus name, amen.” 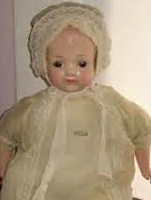 She jumped up, climbed in between her sheets, and snuggled into her feather pillow looking out the window. The breeze blew the curtain into her room. Oh no! She forgot something! Back onto her knees in one smooth motion, she touched her chin with her fingertips again. “Forgot something, God. I want him to be very nice and smile and laugh all the time and not to holler and to buy me candy. And a real doll, I’d like a real doll like Sassy’s. That’s all. Thanks, Lord.”
Cuddled into her bed, she couldn’t quit smiling. Her Daddy would be coming soon, any day now. Mama was going to be so surprised. She closed her eyes and a sweet peace swaddled her as she took a little trip to Sleepy Town, but she never stopped smiling.
Posted by Caryl McAdoo at 10:39 PM No comments:

HALLELUJAH! It's a book!

I awoke late this morning for not being able to go to sleep last night, so got a not-so-early start on the day. I went to work with several projects on my list. For those of you who don't know, we've been moving to about 5 miles south of Clarksville in our new home name The Peaceable. SO I have many projects going on.
Around four, the dogs barking drew my attention to the front window, and I looked just in time to see the UPS man get back in his truck. Working in the kitchen, I figured I'd go get what he brought in just a minute, but of course, I got busy finishing that project and forgot.
After dinner, Ron and I went out to the front yard to visit and bounce landscaping ideas around. He got bit twice right away by the Texas mosquitoes and insisted that I join him in the living room (no TV there) if I wanted to talk. On the way back in, I noticed the box and brought it inside to open.
Ron asked who it was from, but I didn't have my reading glasses on and couldn't tell, but I figured it was the new business and post cards I'd ordered from Vista Print to have at the upcoming ACFW (American Christian Fiction Writers) Conference in September. I got a case cutter and slit the top tape, pulled back the cardboard, then gasped. 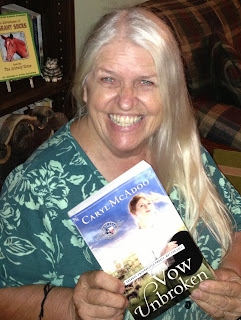 It was Susannah Baylor staring out at me. I said, "It's the book! It's a book! It's here!" We both got a copy from the box and had so much fun looking it over. It's an advance copy produced before the last round of  edits, and not for sale, but I'm pretty sure I can GIVE one away! Sign up to follow my blog, share this blog on your facebook page, and leave a comment here, there, and everywhere or a tweet, and you'll get an entry for each!
Be sure and tag me so I'll know! Winners announced in one week on Saturday, the 24th. That should give y'all plenty of time to talk up VOW UNBROKEN, new historical Christian romance debuting March 4, 2014! 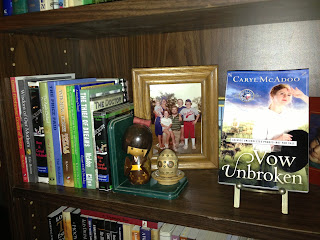 This photo is our shelf of FIRSTS! The books to the left of VOW UNBROKEN are all the first printed copy of our books that we ever put our hands on - a very special collection representing about twenty years of studying, writing, reading, getting critique, then rewriting! The first nine titles I co-authored with my husband, but VOW UNBROKEN is my baby : ) The China doll was a souvenir gift from my husband's trip to China, and the egg, a souvenir gift when my son went to Moldavia on a mission trip. Also very special! 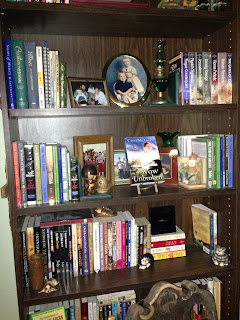 This is more shelves, the book beneath the special FIRSTS shelf, the books are all from authors who are my friends. These books represent so many dear relationships God gave me and many enjoyable hours of reading!
I hope you will rejoice with me! The box of books came on my grandson Seth's 22nd birthday! August 14th! What a great day! Y'all be blessed and know that when you trust on the Lord, your dreams do come true! He is such a loving Father and has blessed me BIG this day!! I praise Him and give Him G*L*O*R*Y!

During the late afternoon, bi-weekly quilting bee at the Sulphur Fork Prairie Methodist Brush Arbor, just prior to the evening prayer meeting.

Mabel pulled her needle through the material high into the air. “Such a disgrace! Can you believe it?”
She looked over her friend’s shoulder. The children played tag while the men pitched horseshoes. Greta frowned. “How sad for his poor mother. Are you sure that it’s true, Mabel?”
“Yes, ma’am, I am. Positive, because Hortense, that’s my neighbor Bea’s sister, was there, in person I tell you. She saw him with her own eyes.”
At the far end of the quilt, Vera shook her head. “I heard the man was soaked, so drunk he couldn’t walk. Why, he passed out right there where he was under the wagon. And in public!”
Thelma sat at the corner to Vera’s right. “According to a very reliable source, he’d been sharing a jug with a slave, too. Drinking right after him. They said he didn’t even bother to wipe it off.” She shook her head with a disgusted expression. “Put his arm around that darkie and acted like it were nothing to be drinking with a colored man.”
“Tsk, tsk, tsk.” Mabel chided. “I had such high hopes for Henry Buckmeyer, him being a veteran and all.”
“Well, I heard that him and ‘Lizbeth Akins were sparking.”
“Really?”
“No!”
“Who told you that?”
“Can’t say, but it’s the Lord’s truth.”
“Well I never, she’s only a child.”
“And him a grown man. That’s awful.”
“And a lay about drunk!”
“Does Brother William know? Or Martha?”
‘Heard he’s the one caught ‘em. Heard Martha whipped the girl ’til she could barely sit down.”
“Well then, ladies, we have a duty to pay Sister Buckmeyer a visit. She needs to know.”
“I agree.”
“After all, she’s his mother, she has a right to know.”
“Perhaps with the Lord’s help, she can do something with that no-count son of hers.”
“I do hope so. And before it’s too late.”
Thelma shook her head. “Bless her heart. Might just be the undoing of a fine woman. Henry’s all she’s got.”
“Yes.” Vera gave a sideways glance to her left, her right, then all the way to the other end of the quilt. “Because she certainly has no husband.” She hiked her brows at the other women and nodded with her lips pursed.
Posted by Caryl McAdoo at 5:29 PM No comments: