Mama tanned my hide good tonight, but I don’t care. I mean I know it happened at the Lord’s Day gathering and all, but still. It was worth every lick ’cause now Henry knows how much I love him. I can’t believe Pa went and told on me or even that he just happened to turn around right at the very moment I kissed Henry. That's prob'ly the onlyest reason he didn't kiss me back none. What with Pa staring right at us, what else could my beloved do but push me away? I’m sure that he likes me, too. I can tell. So what if I am only fourteen, I’m as mature as I’m ever gonna get, and past ready to be his. Mis’ess Patrick Henry Buckmeyer. I can hardly wait for the day!
Posted by Caryl McAdoo at 8:59 AM No comments:

The blacksmith double tapped the new bit then plunged it into the water again. He held it under while it hissed and steamed then pulled it out and eyed it hard. Henry bent and checked the angle. Seemed right. “Looks good. You have any conchos?”
“No, trading post might.”
Henry turned and stopped short. He studied the sky. A wall of black, angry looking clouds headed toward him. A fresh breeze cooled his face, then on its heels, a blast of colder air. Holding his hat on in the whipping wind, he took another step toward the trading post then froze.
Hair streamed away from the most beautiful face he’d ever beheld. She filled his vision. Chin held high, the lady gripped the porch’s post and seemed to dare the storm to blow her down. In all his days, he’d never seen such a woman. Strength and determination etched her face and stopped his heart cold. He stared, memorizing her every feature. A bit of ice stung his face, then a gust carried pea size hail drove him back under the smith’s shed.
He ducked in and jerked his thumb over his shoulder. “Who’s that lady?”
The man looked up, searched a bit, then shrugged. “What lady?”
Henry turned back, she was gone. Had he only imagined her?
The storm blew in and back out leaving only a half inch of rain and a light covering of ice that quickly melted in the Tejas sun. He put the new bit into his saddlebag then eased over to the Sulphur Fork Trading Post. At the door, he held his palm out toward his dog. The animal sat like the good mutt he was, and Henry went on in.
The owner turned around, a feather duster in his hand. “Well, howdy young man, Buckmeyer right? You and your ma were in last month or so? ”
Henry nodded. “Yes, sir.” He pointed at a five pound sack of salt on the shelf behind the counter. “Need that and some sugar for Mother, and Smith said you might have some conchos””
“Afraid not on the silver, anything else you need? Powder? Shot? Got plenty of that.”
“No, sir. The lady who was here before the storm, you know her?”
The shopkeeper grinned and gave him one nod. “Susannah Baylor, she has a right nice block of black land a few miles south of here.” 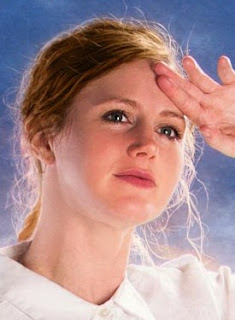 “That so? Her husband farm?”
The man shook his head. “No, Andy and his brother were into timber. Had themselves a nice steam sawmill that Jacob hauled all the way up from Memphis. Both of ‘em died in a logging accident over by Langford Creek. Been five year now, maybe more.”
Henry pulled a quarter piece of a silver coin from his trouser pocket and laid it on the counter. “So, is the lady still a widow?”
“Yes, sir, she sure is.”
Swinging into the saddle, Henry reined his horse east. “Come on, Blue Dog. We’ve got traps to set.”
That evening, before, during, and after he and Blue made the rounds checking traps and trotlines, he couldn’t get the image of the widow out of his mind’s eye.

Posted by Caryl McAdoo at 11:21 PM No comments: